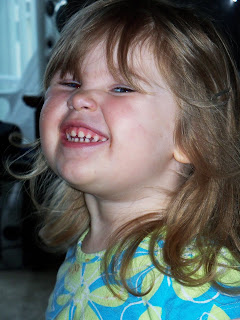 How I Potty Trained In One Week

A week ago I posted about beginning Operation Ditch the Diapers. I’m so excited to report that a week later Amber is what I would consider fully potty trained!!! Woo HOOOOO!!!
And how does Amber feel about all of this?? Well if you look at the picture you can see she’s pretty proud of herself!
I’ve had a couple of different people ask about exactly what I did to get her potty trained so quickly and so here goes!
First I want to start off by saying that by “fully potty trained” I mean she tells me every time she needs to go potty, runs into the bathroom, and goes. Today is the first day we’ve managed to make it while she was still completely dry every time but I figure as long as she’s in the bathroom, trying to make it–it counts! We’re still working on the whole concept of going #2 although she did go with virtually no problem today (yey!) she still thinks it’s kinda scary though (lol). I will also mention that I do still have her in Pull Ups for nap time, bed time, and when we go out and about, but she’s in underwear the rest of the day. Also when we went to church she was in Pull Ups but she still told the nursery workers when she had to go potty and went twice while there! 🙂
When I first started researching and asking around about how to potty trained I got a little overwhelmed feeling. Everyone from friends to websites to magazines and books had tons of advice but most of it was really general and went along the lines of “here’s kinda sorta helpful hints but really each child is different and when she gets it she’ll get it.”
Uhhh…ok great–so what do I do???
(and I will mention that Amber didn’t show virtually any of the “readiness” signs. She was interested in the potty and bathroom but only because of her great Potty Tots program but other than that there were no indicators. She didn’t care if she was wet or dirty–in fact she hated for me to change her poopy diapers and would often insist that she was still “nice and clean” and didn’t need changed. She never said she had to go, still got her diapers soaked through her nap, had a hard time pulling pants on and off, on and on. Just throwing that out there since because of that I thought I was going to have a huge battle on my hands and instead she was potty trained within a few days–just throwing that out there!)
I’m the kind of person who likes being told–look here’s a list of what you need to do first, second, third. That way I have a game plan while fully realizing I can change and adjust it to fit me and my child if need be. So when my cousin told me about the e-book she used to fully potty train her not even 2 year old boy in 3 days I was really excited! The book is called Potty Training Basics and you can get it here. It costs $17 which might seem pricey but if you think about it that’s not even the cost of a box of diapers and it has a money back guarantee. I would highly recommend it! I followed it “to the letter” for the first day with the exception of the Pull Ups for naptime and bedtime. I hadn’t been planning on “night time” training yet even though the book recommends it because frankly Amber wakes up before I do and I’m just too exhausted to tackle it right now! Well, little did I know that I wouldn’t have a choice on this and she was so into potty training that the first several nights she woke up screaming at 3 a.m. that she had to go POTTY!! Thankfully the past few nights she’s just stayed asleep and just had to use the potty right after she wakes up, lol!!
I feel like the e-book was vital for me in order for our success and that Amber’s Potty Tots Program was vital for her part. The e-book gave me guidance and direction and Potty Tots helped make it fun, not scary, and understandable for Amber. You can see my full review of The Potty Tots here!

In addition to those I also created a “sticker chart” for Amber which is just a piece of scrapbook paper cut wavy on top w/ Amber’s name in stickers on it. Every time she went in the potty she gets to choose 2 stickers (one for the back of each hand) and then when she gets tired of wearing them she runs and puts them on the chart. She also gets a treat every time she goes in the potty. The first few days I had homemade chocolate chip cookies that I’d made for our anniversary so she got a small piece of those. After that it’s been more healthy stuff like fruit, crackers, etc. I would highly recommend using bribes although which ones work will just depend on your kiddo. Amber loves stickers and food so those have worked perfectly for us.

Another *great* tip that wasn’t included in the book came from my new Coastie wife friend Katy. She told me about Gerber training pants which are panties but a whole lot thicker so they’re great for training because your kiddo can feel they’re going but it doesn’t make a HUGE mess! I didn’t use them on the very first day since we spent all day in the bathroom and I wanted Amber to REALLY tell when she had an accident but they’ve been amazing ever since! You can find them at Wal*Mart or Target or anywhere like that. I almost missed them in the Wal*Mart here because they had them next to the Gerber sets like onsies and baby bath towels and not by the rest of the toddler underwear.

I have run into a few speed bumps I didn’t expect along the way–the big one was how much harder nap and bedtime has become!!! (including the crazy 3-4 am wake up calls) She’s a smart little bugger and figured out that saying “I need to go potty” gets her out of her crib. So nap/bedtime has become a struggle as I try to not discourage her if she does need to go–but get very grumpy if we’ve been sitting there for 15 minutes only to figure out she didn’t have to go after all. Still working on exactly how to deal with that! A few days she just boycotted nap time altogether by yelling about “going potty” the entire time. That hasn’t happened for a few days now though so I do have hope! Also she has been a little more insecure in other areas–like asking for her pacifier at bedtimes even though she hadn’t mentioned it in months before this! I know this is all to be expected with any huge changes though and we’ll just muscle through it!
Ok–I think that covers it all! If you have any questions just ask! Right now I’m off to chase a 2 year old into the bathroom because she just informed me she “has to go potty!!!!”