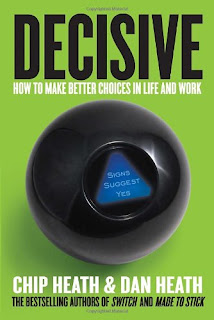 Life is full of choices–some of them easy, “Should I eat this chocolate??” Some of them a little more difficult, “Should I get out of the military and go back to college?”

In Decisive: How to Make Better Choices in Life and Work

Chip & Dan tackle the latter kinds of questions using a process they define as WRAP. (Widen your options, Reality test your assumptions, Attain distance before deciding, Prepare to be wrong)

In Decisive you can tell that these guys are smart–I mean, super duper consult with multimillion dollar businesses on decisions kind of smart. And this is definitely such a “meaty” book that it needs to be read half a chapter at a time just so your brain can process and digest all of the excellent information they’re throwing at you.

That being said the book is also very easy to read and they have awesome and hilarious senses of humor which show up frequently–for example when quoting a Q&A section of Ask.com they put in footnotes which states “Note that we have corrected the punctuation and capitalization on these entries (though not the grammar). This diminishes authenticity but greatly enhances one’s sanity in reading it.”

Absolutely hysterical! I burst out laughing when I read that!!!

They also use funny-clever terms like “Ooch” when describing the process of easing into a decision by control testing it in a small way to see if it works first before leaping into it full scale.

I was continually impressed and enlightened by the points brought up in the book. An example of this is in the chapter about Honoring Your Core Priorities they discussed that for each new thing you decide that you want to do (spend more time with your kids, take a college class, exercise more) there is something that you will have to Stop Doing in order to make time for that. They suggest creating a Stop Doing list and gave an amazing example of a military Naval ship who used this process to fix and upgrade their ship so that they could stop spending hours and hours of re-painting it and move on to more important missions that the crew actually enjoyed (if only the rest of the government/military would take their example to heart!!!)

I found myself continually stopping while reading the book to read sections aloud to my hubby that were insightful, interesting, startling, or funny. It was great to read a book that really gave my brain a workout and taught me new things–whether you’re running a small business or just your own home this is definitely a book worth owning!! Apparently everyone else on Amazon agrees–it was just released and already has 41 customer reviews and nearly 5 stars!!

I received an advanced copy for my unbiased opinion-and I’m very glad I did!