Deprecated: Function create_function() is deprecated in /home/confide1/public_html/wp-content/themes/blogpixiecassidy/functions.php on line 266
 I’ve been tagged 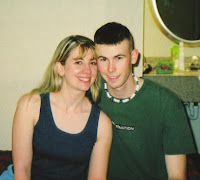 I’ve been tagged by Jaimin 😀

Together: We’ve been married for 3 years, and “together” for 6 years.
Who eats more? Me 😛 Nursing makes you HUNGRY!
Who said I love you first? Honestly have no idea–we eased into it so much it was just like one day I realized we’d been saying “I Love You” for awhile. Bob was the first one to tell me how in love with me he was and that he wanted to get married though.
Who sings better? We have a standing argument about that but neither would win American Idol lol
Who is smarter? We’re about equally smart in totally different ways and areas
Who does the laundry? Me–I have no idea how he did it on his own for a year because he’s helpless
Who does the dishes? The dishywashy 😉 But I load and unload it
Who pays the bills? Me, Bob is helpless when it comes to finances–his mom did it for him up until we got married-even when he wasn’t living with them anymore, lol!!!
Who mows the lawn? The Mexicans–lol! And they do it bright and early every Friday morning and wake me up–boo hiss
Who cooks dinner? Me–he pitched in several times when I was pregnant and so sick and right after I had Amber and was recovering from my C section though
Who drives when you are together? Bob–I won’t drive with him because he’s the worst backseat driver ever!
Who is more stubborn? Both of us–like Jaimin said, it makes it interesting when you’re trying to raise a child!!!
Whose parents do you see the most? About even right now but hopefully soon it will be mine 🙂
Who kissed who first? Bob–it was short and sweet!
Who proposed? Bob but I knew it was coming and had already started planning the wedding-lol! so I guess it was pretty much mutual…4 months into dating we had decided we were going to marry each other
Who is more sensitive? Me–I am a girl after all
Who has more friends? Me–but he has more friends that live here because of guys at work.
Who has more siblings? Me, he only has one brother and I have 3 siblings-4 if you count my new sis in law 😀
Who wears the pants in the family? We do work together as a team, but when it comes to major decisions, Matt’s decision is usually the final
I Tag: Heidi, Sarah, and Mary-because they’re my only fellow bloggers, lol