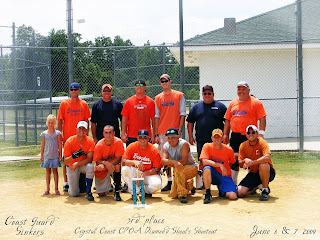 This past weekend we kept busy by going to Bob’s sofball tournament. (thankfully this year it wasn’t on my birthday 😉 ) Originally he was only going to be a back up hitter but due to a couple of guys dropping out, and a few others getting hurt, he ended up playing quite a bit. He did great!! Especially considering they didn’t have any practices before the tournament since everyone else on the team just finished playing in the city league. Since Amber isn’t quite as flexible with when and where she takes her naps these days she and I had to come up seperately and miss the first game both days. We got to stay for the rest though and we both had fun, although I spent more time chasing her around than actually watching I’m afraid!! Sunday night we got to go have a bbq to celebrate the teams 3rd place finish. It had been a looong time since I’d been to something like that and it was really nice to visit with other Coasties and Coastie wives. Amber was pretty worn out and Bob was so sore he couldn’t move on Monday–but it was a good weekend! 🙂 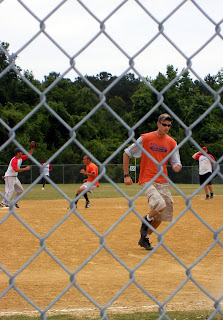 All the guys at work call Bob “Stretch” it’s so funny to hear them hollering that at him! LoL 🙂 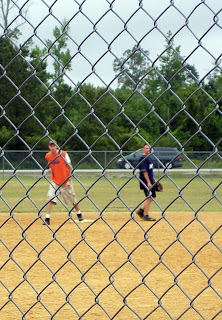