October 14, 2009 / Nicole / 13 Comments
I’ve been tagged by “The Monkey’s Mama” over at Monkey’s On the Bed I just discovered her blog yesterday through I ♥ Faces’s Facebook page because she had the cutest entry ever and then she found me through my comment on it. She liked my blog *happy dance* and decided to tag me, how cool is that? Yey for new bloggy friends!

What are your middle names?

How long have you been together?

I count from August 1, 2002 because even though that’s the day we met we were never apart again. However we didn’t have our  “RDT” (relationship defining talk) till a few weeks later (btw, stole that term from her and I love it! LoL!)

How long did you know each other before you started dating?

We didn’t…LoL! I consider our first date to be the day we met If you want to be techincal then we knew each other about a week and a half before our first “real” date.

Who asked who out?

We ended up hanging out the first day through mutualy wanting to, he asked me out for our first “formal” date but I was the one who initiated the “RDT” LoL! He’d been holding my hand all day and everyone kept asking us how long we’d been together so I figured we might as well get it over with.

Who made the first move?

I saw him first, but he came through my line, I stalked him at the Fair but he didn’t see me, then later on he came up to me and hung out, he asked me on a date, I initiated the “RDT”, so bascially it was all very mututal!
How old are each of you?

Did you go to the same school? 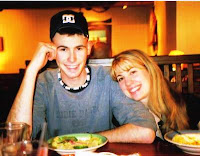 Are you from the same home town?

Nope, he’s from GR and I’m from RS, 15 minutes apart and huge rivals 😉

Who is the smartest?

Who majored in what?

Who is the most sensitive?
Me, I am the girl after all! He has extremely thick skin thanks to his dad
Where do you eat out most as a couple?
Eat out? LoL! Kidding, uhhh…whatever fast food sounds the least gross at the time 😉 If we’re talking “fancy” the Outback is our number one and only “nice” resturant we ever eat at 🙂

Where is the furthest you two have traveled together as a couple?

We’ve moved across the US (Wyoming to DC, Wyoming to NC) together in a vehicle twice

Who has the worst temper?
Neither of us, but if he does get mad he stays mad so I guess it would be him. If I get mad I’m over it in 2 minutes.

How many children do you want?

No clue, I always wanted 4 but with my c-section that might not be possible and Bob can’t decide how many he’d like, on days Amber’s good he wants to have another one right now, on days she’s bad he swears she’ll be an only child–LOL! Really it’s in God’s hands though so I’ll leave it up to Him 🙂

Who does the cooking?

Who is more social?
Definitely me! But he’s not anti-social at all..I’m just extremely extroverted! 🙂

Who is the neat-freak?

Who is the most stubborn?

Who wakes up earlier?

LOL! Oh wait, I actually do have readers now who don’t know me. Yeah…he’s a morning person and I’m NOT (yes that does need to be bold and in caps)

Where was your first date?
Well either the Fair (day we met) Don Pedros and the GR Bowling Alley and a walk by the river (first “formal” date) or Lagoon (RDT day)

Who has the bigger family?

Me for sure, I have 2 brothers, one sister, and one sis-in-law and oodles of extended family. He has one brother and one half sister.

Do you get flowers often?

No, so sad, lol. We’re too broke to afford them. He has been very good through out our relationship about buying them for me though 🙂

How do you spend the holidays?

Changes with each year…so far we’ve spent every Thanksgiving either by ourselves with each other or without each other, and Christmas has just depended on the year.

Who is more jealous?

Me for sure, I used to see red anytime I heard his ex-girlfriend’s name, but I’m over it. It’s gotten to the point where it’s just funny really. I mean, a sane person does not call up their ex (6 years after they’ve broken up) at 11 pm at night to congratulate him on his new baby, get their current address to send a baby gift (which never arrived) and say to “give Nicole a big hug from me”. And it’s not nice to hate a crazy lady, so I don’t 😉 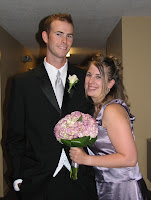 How long did it take to get serious?

I knew a month into meeting him that I wanted to marry him and I found later on that he thought I might be “the one” just a few days after we met. We told each other that we wanted to get married about 4 months into our relationship.
Who eats more?
Uh…him I think, but really he’s such a bean pole!!!! So maybe me.

What do you do for a living?

“me–I write blogs. HA. Really. any mom that reads this knows what we do!” ~LOL! From this past week I’m beginning to think that this statement is all too true!!!!!
Him–BM3 in the USCG

Who does the laundry?

Me, watching him do it is seriously scary!!!!
Who’s better with the computer?
Him by far! He’s my tech support for my website although I did all the htlm work on my blog myself and I can rock Photoshop Elements 😉
Who drives when you are together?

Bob, I refuse to drive when he’s in the car because he’s a terrible back seat driver! Plus he likes to drive so it’s all good

What is your song?
“Little Moments” by Brad Paisley the first time we heard it we were driving around holding hands and when that line came on we looked at each other and smiled ♥ Also “Laughed Until We Cried” by Jason Aldean because the verse about finding out that she was pregnant is exactly what happened we when we found out I was pregnant with Amber.
I’d love to hear from Paulina, Jaimin, Heather, and Rachel!