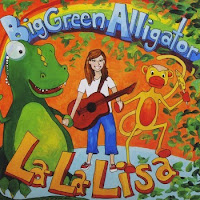 I’ve got to be honest, I’m not a huge fan of children’s music, lol! I can do kid shows and even cds that have a storyline with music mixed in no problem, but stick in a cd that’s nothing but non-stop perky kid music and soon I go nuts!!! It might just be me, but I have a sneaking suspicion most adults probably feel the same way!
That being said, Big Green Alligator does not get on my nerves nearly as much as most children’s cds do (lol!!!) Most of the songs are super cute as well as having sweet, positive Christian messages behind many of them while others are just lots of fun. In my opinion it is a little on the long side for a children cds with 18 tracks, but this does provide a good variety of music from very up-beat contemporary tunes to soft soothing songs.
It is kid approved! (which I suppose is really the important part right?!) Amber especially likes to dance to the song the Cd is named after, and made me get up and dance with her for a couple of the other songs as well. I have a feeling the song “My Little Brother” will become a big hit in just a few months 😉
So if you’re looking for a fun, peppy children’s cd and can deal with 60 minutes of bouncy melodies be sure to check this CD out! 🙂