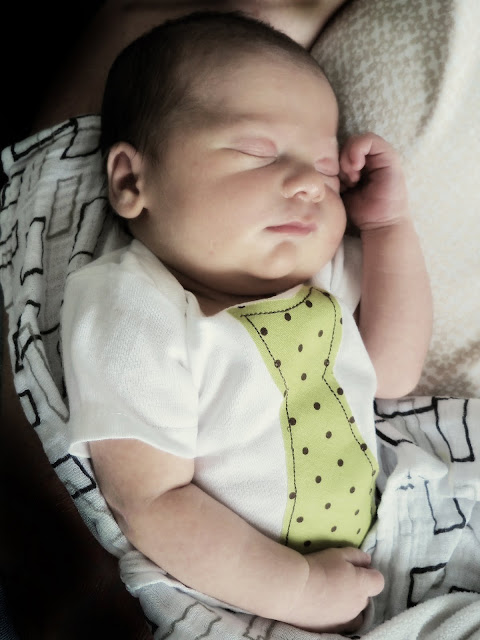 Tyler Elliott made his grand debut into the world at 1:24 a.m. July 23, 2010. He weighs 8 lbs. 2 oz. and is 20 1/2 inches long.
Two words to describe the birth experience?
Absolutely Insane!!!!!!!!!!!!!!!!!!!!!!!!!
If you’re an observant reader you’ll see I blogged about how big and miserable I was about 8 hours before I gave birth (when I thought nothing was happening…little did I know, lol) If you’re my friend on Facebook you can see that I was still on FB and chatting at 10 p.m. After that I went and did some work stuff for a little while (I pointed this out to my boss–if you’re working 3 hours before giving birth doesn’t mean you’re dedicated I don’t know what does, Ha!!!). By that point I was still feeling very uncomfortable Braxton Hicks so I went and took a bath, which made them go away so I figured it wasn’t the real thing. By 11 something I decided I should probably go try to get some sleep. As I lay there I got more and more uncomfortable but nothing hurt yet. I decided to get up at midnight and take another bath to see if that would help.

At first I was just like, “Ok here we go!” and started gathering my last minute items and I went and woke up Bob (who had been sleeping since 4 p.m., he’d had a long hard day at work and took a nap that he never woke up from). Just a few minutes later I started to hurt bad. It felt like he was taking forever to get ready and I was like–“Honey we have to leave NOW!!!!” When we got down to the car we put the hospital’s address in our GPS and it couldn’t find it. I just about freaked out!! Bob’s smart phone saved the day and he followed it’s directions to the hospital. During the ride he kept joking about me being grumpy while I was just focused on getting through the contractions. On the ride to the hospital I kept thinking to myself, “I do not remember ever hurting this bad when I was in labor with Amber!” Which worried me because I’d gotten dilated to an 8 with her before getting my epidural, but I figured I just must have forgotten somehow.

When we got there Bob pulled up to the emergency entrance, threw his hazards on, stuck me in a wheel chair and brought me in. While I was waiting for someone from labor & delivery to come get me he went to go actually park the car. Once the nurse came down she asked if I needed to go up or if we should wait for Bob. A contraction hit so she helped me breathe through it and when it was over I was like, “We need to go, they can tell him where to come!” As we went down the hall I told her, “I want an epidural as soon as possible!!!!!!!” (I was hurting so badly by that point). She just replied that it would take time, they had  to get the anesthesiologist, get me on an IV, etc. I said that I just though I’d let her know so she could get started on all that, (LoL). I had barely gotten a gown on and crawled onto the bed when Bob walked in the room and I started to hurt really, really bad. I kinda started whimpering and the nurse was like, Uh I better check and see what’s going on. So she checked me and then she said, “Honey it’s time to push.”

I did ask that but didn’t actually scream it. I felt like it though. I wanted to scream that I wasn’t ready, I’d never ever wanted to have a completely natural, pain med free labor/delivery, to go get the stinking guy and stick a needle in my back, and that I didn’t even know what to do because I’d never gone to child birth classes and had a c-section last time. Besides where on earth was my Dr.???? Some new guy I didn’t know walked in the room to tell me he’d help out till my Dr. arrived and in case my baby arrived before the Dr. did. By that point I didn’t really care who was in or out of the room at all.

Poor Bob got shoved into the corner of the room to stand there helplessly and watch while a swarm of nurses and the Dr. who wasn’t mine all tried to help me while I pushed.

When I was in labor with Amber and even through the first hour of pushing with her I thought all along, “What’s the big deal? This really doesn’t hurt bad, I don’t see why everyone makes such a fuss about it.” When I saw women yelling on tv during childbirth scenes I’d roll my eyes and be like, “That’s so not how it is.”

Well let me tell ya–if you do it pain med free and your body has no time to adjust to a massive onslaught of labor it really IS that big of a deal and it really DOES hurt that bad. The nurses and Dr. later kept telling me that when you go through labor/delivery that quickly your body has no time to adjust/adapt on it’s own and it’s basically like getting hit with a freight train–fast, extremely painful, and hard!!!

I later found out that Tyler had his head positioned like Amber’s was (up and to the side) and he just barely turned it in time for me to push him out (which might be part of the reason it was hurting so badly). I also found out that Tyler’s heart rate dropped dangerously low twice. The nurse said that if I’d been at an 8 and it got that low they would have rushed me in for an emergency c-section but since I was pushing so well they knew I could just get him out faster if I tried really hard by myself. I kinda heard them talking about it during the labor but was only half processing what was going on as I was mostly just focused on the pain and how to get through it. My Dr. made it just in time to catch Tyler as he was born and after 22 painful, hard, long minutes I was able to bring my baby boy safely into this world and 100% all natural! 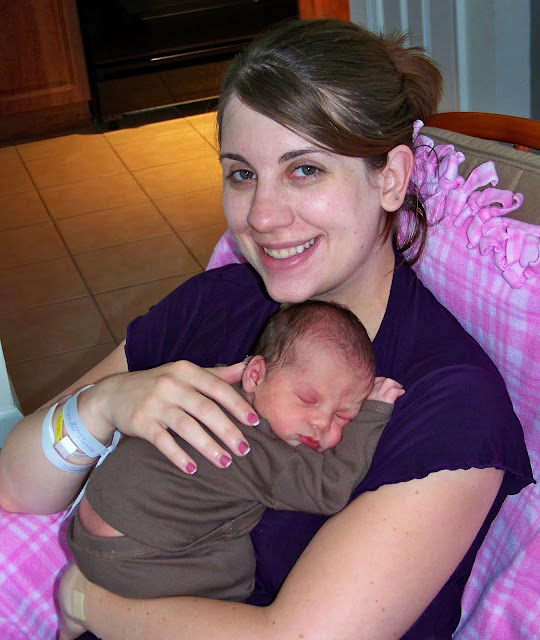 Although it was extremely difficult and painful I’m very happy about deciding to go with the VBAC. Although it was a little more “all natural” than I’d ever planned/wanted everything turned out for the best. We were discharged less than 48 hours after his birth (compare that to a week long stay when Amber was born!!!) Amber got to come visit us in the hospital with my mom and that was really nice. She absolutely adores her new baby brother and so far as done amazingly well with the transition of having him as a part of our family.

So far life with baby is going really well! It’s been the typical exhausting sleep deprived first week, and I’m still ridiculously sore and hurting all over. I know that my recovery this time will be so much faster than it was with Amber though, so I’m very grateful for that. 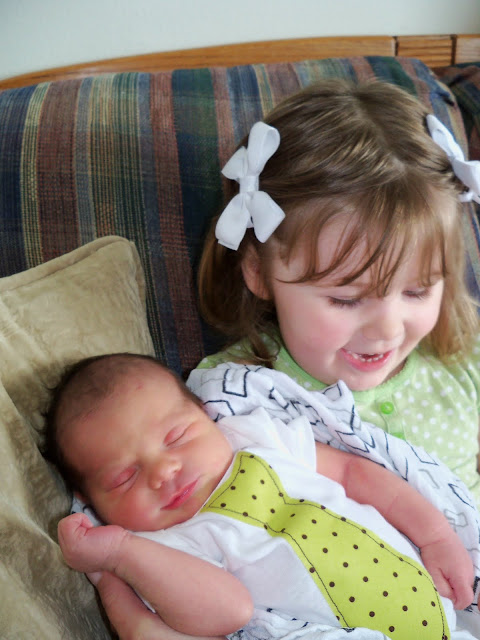 I can hardly believe that I now have two gorgeous perfect kiddos. I couldn’t be happier though and am so grateful for everything! ♥