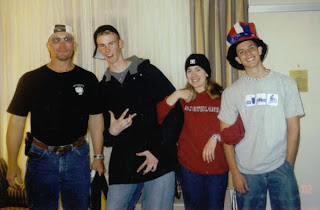 Plate of fudge + Nicole + Nicole not writing down in her food journal = Nicole eating entire plate of fudge…by herself…minus about 4 pieces eaten by hubby and Amber.

I have a confession–again, since I’ve talked a little about this before. I. have. no. self. control.

At least not when it comes to yuuuummmyyy chocolate treats. When I don’t have a plan of action I will mindlessly stuff them in my mouth at random points throughout the day until my horrified husband comes up and goes,

“Did you honestly eat that entire thing of fudge all by yourself??!!”

So, not the best of weeks for me. The really bad part is that I have 5 tasty Christmas goodies just begging to be made. Not wanting an Attack of the Fudge Pudge Part Deux to happen I have a plan!

I’m going to make all the goodies and then send 75% of them with hubby to work so that all the Coasties will feel loved and I won’t have them here to eat them.

I’m making a plate to give to a friend’s family and a plate for the UPS man.

Side note on the UPS man–I live on the 3rd story-40 steps one way. Between blog stuff, Christmas stuff that I’ve bought, Christmas stuff that the grandparents are sending to me, gifts from my best friend, etc, the poor guy has literally been here nearly every single work day for the past 3 weeks!!! I figure the least I can do is hand him a plate of cookies and a Christmas card next time–haha!!!

I will make up one and only one plate with the various goodies on it. I can eat what is on the plate and when it’s gone I can have no more sweets!!! That means I need to have one a day and make it last so I’ll actually have goodies to eat on Christmas since I’m just having those instead of making pies or cheesecake again (hence avoiding Insane Fire Alarm Drama Part Deux)

However–(and this is where most of you will begin to throw insults and pillows at me) when I stepped onto the scale today it said I weigh 1 1/2 lbs less than last week!

Apparently living on the 3rd story has it’s benefits 🙂

I’ll be taking next week off as my eyes are crossed from being so busy and I know it’ll only get worse!

Have you fallen prey to the Christmas goodies? What is your plan to avoid it from here on out?

Not So Fat Tuesday