Sooo…at this very moment I have 3 hours of work I need to do before the end of today, about 14 reviews waiting to be written, a house that needs cleaned…but instead of that I bring you this blog post! 😉 Because sometimes we all need a healthy does of procrastination!

Do I have any closet nerds out there? I played WoW waaaaay back in the day when the highest level you could reach was 70 (seems ages ago) I got all the way up in the high 50s but then stopped. Hubby’s played on and off and on again since we got married and has three level 85s (though he just cancelled his account…again…haha) One of my besties got engaged on the game (for real) and her and her hubby have spent lots of time on it so I know she’ll appreciate this if she hasn’t already seen it. I think the fact me and the hubby found it *SO* hysterical just shows how inner-nerdy we really are!

Red Shirt Guy’s Autotune (hubby loves it so much that he actually downloaded this from iTunes, haha)

Blizzard has responded to the incident by not only fixing the addressed issue, but also by adding a non-player character named “Wildhammer Fact Checker” who happens to be wearing a familiar red tunic: 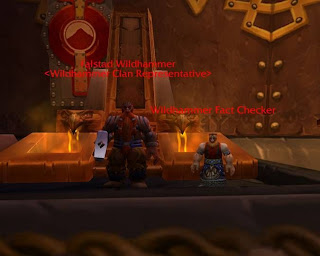 and THIS is my favorite and what me and hubby have been dying laughing over–but I had to share all the above info or it wouldn’t have made any sense/been funny. 🙂 It’s just awesome sauce! Hubby loves it so much he just downloaded the song from iTunes, bahaha.

All info found on Know Your Meme–I don’t endorse anything else on the site, just loved this thread 🙂