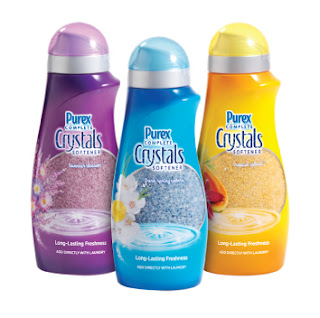 So have you gotten a chance to try these yet? As a Purex Insider I was one of the very first people who got to try them out, pretty cool! As many of you already know Amber has eczema which basically means that most of the time fabric softener is just out of the question. When we first moved back to NC she had a horrible, horrible outbreak which I eventually traced back to using liquid detergent at a friends house while we were waiting to get our washer and dryer back. It’s nasty stuff for babies with sensitive skin! So I was a little worried that I wouldn’t be able to use this kind for the same reason. I gave it a try though, (used a much smaller than normal amount when her and Tyler’s clothes were in there) and it didn’t cause her or Tyler to break out! Yey! I also used it to wash the loads w/o their clothes in it like our towels. I *loved* that it made my entire laundry room and kitchen area smell soooo good! I’ve never experienced that with any type of detergent or softener before! The fact you can throw it in at the beginning of the cycle is awesome as well since this apartment doesn’t have a fancy washer with a softener dispenser. I was super pleased with these so far and would definitely recommend them–I’ve heard many fellow friend’s and bloggers raving about them as well!

Here is some cool information that I found really interesting about the Crystals and so I thought you might as well! You can buy them at Wal*Mart or just about anywhere fabric softener is sold!

WHY IT’S DIFFERENT > SAFE FOR ALL LAUNDRY AND BETTER FOR FABRICS
Do ALL of your laundry—worry free! Purex Complete Crystals Softeners are safe for
all laundry and will not harm, wear down or discolor your fabrics like oil-based softeners.
Safe for all fabrics, including baby clothes, athletic wear, towels, and whites. Unlike other
softeners, Crystals WILL:
• Preserve the flame retardant benefits of your children’s clothes
• Retain your athletic wear’s wicking ability which draws sweat away from your body
• Maintain your towels’ built-in ability to absorb water
• Keep your white clothing from yellowing and graying vs. using traditional softeners
The product won’t harm your clothes and is safe and convenient for the entire family!