Deprecated: Function create_function() is deprecated in /home/confide1/public_html/wp-content/themes/blogpixiecassidy/functions.php on line 266
 ICU ~ 3 letter that can strike fear into any parents heart

As I mentioned in my last blog post, the past 2 weeks have been the worst in my entire life. On Saturday, April 9th hubby flew back in from his pre-deployment training in Florida. We had a wonderful day together after he flew in. That night after I lay Tyler down for bed he kept waking up every hour or so, which is unusual for him these days. As soon as he’d eat he’d fall right back to sleep, though, so I didn’t think much of it. Between 3-4 he woke up crying. I went and fed him and then lay him back down. After about 10 minutes he was still crying so I went back in and figured out he’d soaked through his jammies. So I changed him, the crib, and lay him down again. 10 minutes later he was still crying. When he wakes up in the middle of the night he never stays up so that was really weird. By that point, I was pretty much wide awake so I went and got him and I noticed that he sounded pretty stuffy and was starting to cough a little. He’d just gotten over a nasty cold that lasted a couple of weeks so I figure he was either getting a new one, or his old one was coming back a little.

So I did what any seasoned parent would do–I broke out the humidifier and sat there and held/rocked/sang to him for a little bit then tried laying him down again. No good. He just got more agitated so around 6 a.m. I went and hopped in the shower and put him in his exasaucer and cranked up the hot water until the whole bathroom was steamy like a sauna. This made him happy but when we got out of the bathroom after about 45 minutes he started screaming again. Now he was acting like he was really stuffy breathing weird through his nose and coughing. I figured all the crying he was doing wasn’t helping. He’d calm down for a bit, then start screaming again, in a vicious cycle. He’s always been a very fussy/colicky baby. I figure the poor kid was super angry about being sick and not having slept all night.

Around 10 a.m. he finally crashed out, while sitting straight up in his high chair. I just wheeled it into our bedroom and shut the door so that he could get some rest, peeking in on him occasionally. He slept for about 3 hours and when he woke up he was acting sick but nothing out of the ordinary.

Shortly after this in the afternoon I noticed he was getting really congested and starting to wheeze slightly. I told Bob that Tyler’s breathing was bugging me…I had one of those Mommy intuition gut feelings. After watching/listening to him for a little bit Bob told me he just sounded congested and he was just sick with a cold. So I pushed the nagging feeling away and got Tyler down for his second nap–this time in his bouncy chair since if I tried to lay him flat in his crib he’d freak out.

When I checked on him during that nap I noticed that even when he was asleep he was breathing really fast and hard and shallow, not the deep, slow breaths you should be taking when asleep. That’s when I started to get worried and I decided to call the nurses hotline–just to be safe. When the pediatrician called back she asked if he was using his stomach muscles to breath (pulling in just below his ribs) and/or if his nostrils were flaring. By this point, he was doing both and he was wheezing pretty badly. She said that we should definitely take him to the ER, just to be safe. So I left Bob with Amber around 6:45 p.m. and took off to the Beverly Hospital. I figured that he might have a moderate case of bronchitis and texted my mom and mom-in-law to let them know in the few minutes we were waiting to be brought into the back. Because the Beverly ER is so great they got us back to the observation room right away. We were only in there for a few minutes and they took us back into the ER and had me sit on a bed holding Tyler on my lap.

Then all of a sudden:

I was surrounded by about 5 Doctors and nurses all rushing around Tyler, all doing things to him at once.

It was such a huge sudden change and shock I sat there stunned thinking, “Whoa, whoa–*what* is going on??!!”

On one side they were giving him an IV and drawing blood, on the other they were telling me all these different kinds of medications and shots they were giving him to open his airways. It dawned on me that this was obviously much more serious than I had thought, I had no time to process any of it, however, as they were so busy doing this to him it was all I could do to help hold him still, sing, talk, and rock him to try and make it all easier for him.

My head was spinning.

After a little bit, one of the nurses came over and told me, “I don’t know if you heard this but the Dr. wants him to be admitted to Children’s in Boston, so we’re going to have them come fly you there.” Totally in shock by this point I had no idea what to think. They kept using words like “precaution” and “just to be safe”. In the meantime they told me I had to hold a mask with humid medicine coming out on Tyler’s face. The Dr. firmly said that it didn’t matter if he didn’t like it or cried–I *had* to make sure it stayed on, so I did.

In what could have been a very short, or very long time the crew from the life flight came in and started briefing me on what was going to happen. They told me that they were going to be admitting Tyler to the ICU and ran me over the helicopter procedures. I definitely never imagined my little guys first flight was going to be a life flight over Boston! I called Bob and let him know what was going on, and then texted and told my Mom and mom-in-law. I had been so pre-occupied with Tyler until that point I hadn’t been able to update anyone so of course that information came as quite a shock to everyone.

If it hadn’t been for the circumstances and shock I was in the flight over would have been really cool. We flew right over our apartment complex and right before we touched down on the hospital roof we flew over Fenway and the Red Sox were playing so I got to see that from the air, as well as all of Boston. Once we got inside we went through a maze of hallways and lights when I tried to talk/sing  to Tyler while we walked along as all this time he was on a stretcher in a brace so he couldn’t roll around. I was starting to feel pretty sick myself but kept on singing because it was one of the few things that calmed him down. We were put in an admitting room there where they monitored him and got up to speed from the other hospital. He was absolutely exhausted by this point and wouldn’t stop crying. They told me I needed to keep the mask on him continuously at this point so I sat there holding a writhing, screaming baby while keeping the mask clamped on his nose and mouth. They also told me from that point on I was not allowed to feed him anything until he got better.

The one part of the entire thing that scared me to my core was when the nurse was giving me the run down of everything right before he was admitted to the ICU. After she finished she said, “So do you have any questions?” I said, “So we have to go to the ICU…but he is going to get better, right?” She just paused and then said, “Well I can’t make any promises but we see babies just as sick as he is that get better, but like I said I can’t make any promises” After hearing “precaution, just being safe, only because there’s not a good middle ground” all night long terminology like this from a Dr. scared me to death! I tried to wrap my brain around what she was saying but honestly just couldn’t. My mind right then went, “NO. He *is* going to get better because I simply would not be able to function, ever again, if he did not. I will not even think about the fact because he will get better. God won’t let anything happen to him.” So from that point on I didn’t even think about it and just focused on what I could do to help Tyler feel better. 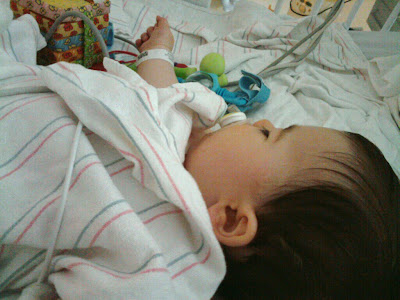 We were admitted to the ICU where he was hooked up to a million different machines. he was in a crib but it was the size of a normal hospital bed, it just had bars around it. So they let me climb up on it next to him and hold him through the night. Since he had to have the mask on all night and wouldn’t leave it on himself I sat there all night holding it to his face and moving it around when he moved his head. I probably only slept about a hour or two, dozing on and off holding it, that entire night. The next day was a long, slow torturous blur of the same. Bob was able to come bring me some essentials while a friend babysat Amber. Very thankfully we had hundreds of people praying by that point and I could see as their prayers were answered. By the second day my voice was completely gone and I was sick with the same thing Tyler had. I have no idea how I had the strength to get through it all, but I managed to without falling totally apart. By that evening Tyler had drastically improved. They decided that he had bronciolitis due to RSV or some similar virus. By Tuesday morning he was so much better that he was sitting up in bed, laughing, trying to roll around, and pulling/kicking all of his cords off. He also started eating well again and that afternoon they let us go home. 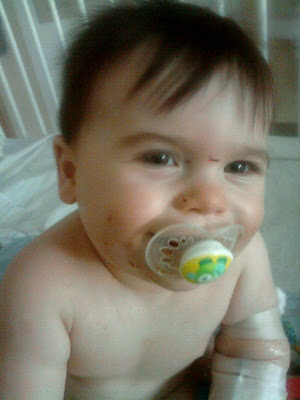 It was one of the worst things I’ve ever experienced in my entire life, but I am so very thankful that everything turned out the way it did. I’m also so very, *very* thankful for the outpouring of love and prayers everyone we know, and many people we don’t, showed us during it. So thank you!! I’m so happy to say that he is just now finally “all better”. I’m still fighting it but am nearly better as well. Bob and Amber both ended up getting it as well but it was much milder in both of them, so that was a praise as well.