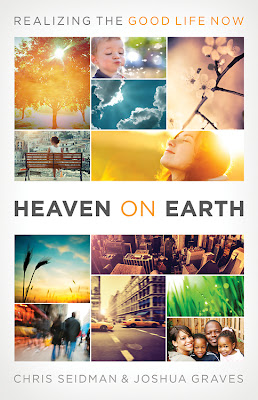 The Beatitudes…a beautiful, perplexing passage of scripture that launched Jesus ministry into a full blown revelation! Although I’ve read the Sermon on the Mount several times I’ve never read a book about the Beatitudes so I was really interested to see what the two Pastors insights were in Heaven on Earth: Realizing the Good Life Now

The book was fairly easy to read although at times they reference phrases like “the Torah” and when discussing peace they use phrases including “Shalom” quite a bit that occasionally threw me. Most of the time they do a good job explaining why they are including the difference terminology but occasionally a word or phrase would make me trip up in my reading-and as someone who has tackled the KJV her entire life I’m curious to see if others had that happen as well.

Overall I really enjoyed this book and a few of the chapters were especially great! In chapter 2 “For the Bankrupt” I loved their explanation of “Blessed are the poor in spirit, for theirs is the kingdom of Heaven.” They go on to explain that we don’t have to try or do something because we’re already all poor in spirit-we might not realize it. I also really found the part that talked about statistics that show that “the average person thinks that they’re better than the average person.” I’ve been thinking and reading a lot about pride and the different forms of sin that come out from it and  this chapter really went along so well with that and helped expand my thinking on that point.

Going hand in hand with chapter 2 chapter 4 “Big and Small” covers Blessed are the meek, for they will inherit the earth. In this chapter it talks about our current cultural obsession with fame and celebrities. It talks about the fact that meek is “Totally surrendered to God means we understand who we are in proximity to God. That is, one understands one’s inherent smallness in light of God’s inherent largeness. It means we revolve around God’s life, not the other way around. Do you know the difference between me and God” God doesn’t wake up in the morning thinking he’s me” Along the sames lines lately I’ve been pondering on how small we tend to make God and how many of our issues come about because of that. I feel that they hit the nail smack on the head with the above sentences!

The only part in the book that I felt I disagreed with was in the chapter on peace (chapter 8) while I loved and was touched about the story of Charlie I felt that it indicated that we as Christians should be against the death penalty–and while Jesus came to bring peace and lifts up the peacemakers I also believe that it must be seen through the filter of the rest of the Bible and taken in context which to me does not indicate that Christians should not support the death penalty.

Overall this book was extremely interesting and I would recommend reading it and deciding for yourself! Be sure to read the other Amazon Reviews